Be it a new fitness plan, dieting, New Year’s resolution or any other personal development. In order to create lasting change, you need perseverance. Setbacks and resistance are normal occurrences in any process of change. This is the point where willpower comes in.

To get back on track, willpower is needed. However, willpower is a limited resource that can be depleted. If you want to hit your goals, you have to have the right amount of willpower.

What actually is willpower?

Willpower is simply the ability of an individual to control himself or herself. It’s a certain level of inner strength that is associated with motivation and determination. Willpower is what one uses when deciding not to drink beer when trying to quit being an alcoholic.

Your personality will determine how much you struggle with willpower. Some personalities will be driven more than others and will find willpower easier to command and control.

Where does our willpower come from?

Normally, willpower is an expression that is used by everybody without even being noticed. It’s a concept that isn’t visible and easy to understand. However, from a philosophical point of view, its origin can be traced in metaphysics and more particularly in Aristotle. It was then spread into some western religions and became a first-class virtue.

Both Metaphysics and religions believe that willpower comes from an individual’s free will. On the other hand, psychoanalysis proposed some objections to both the concept of ‘will’ and ‘willpower’ as a result of the discovery of the unconscious mind. According to psychoanalysis, all conscious processes are only tips of the iceberg’ in people’s mental activities.

In real life, the thoughts and actions of different people are largely determined by forces that are not the will, but rather the unconscious mind. For instance, the ‘lapsus linguae’ also called Freudian slips, episodes where an individual wants to say a single thing, but without meaning to’ he or she ends up saying a different thing. A person’s unconscious mind is also said to be responsible for `parapraxis’ which is a situation where one decides to do a certain activity but ends up doing it completely different from the expectation.

We normally see this in our daily lives. Someone getting ready early enough for an appointment, but accidentally arrives late or fails to arrive. Or someone may decide to do a good job at work, but ends up having another busy schedule that won’t give space for the tasks.

According to psychoanalysis, the will isn’t a force, but rather an expression of an unconscious desire. This is the reason behind many plans being postponed, decisions being changed that never become a reality, or even failure of intentions to turn into practical actions.

Is there a part of our brain responsible for willpower? 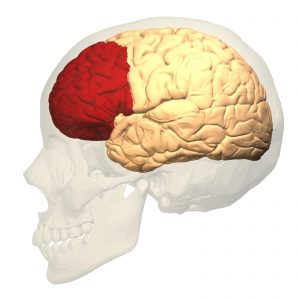 The prefrontal cortex is the brain part located right behind the forehead and eyes that is responsible for analyzing thoughts, abstract thinking and also behavior regulation. Some of these include making choices between the wrong and right, meditating conflicting thoughts, and even predicting the outcomes of different choices. The prefrontal cortex simply controls what one pays attention to, what he or she thinks, feels and what action to take.

Throughout human evolution, the prefrontal cortex has continued to expand in size which is a clear indication of a strong selection pressure regarding its continued evolution and growth. In fact, within the last 5 million years ago, the size of the brain is said to have increased by about threefold, whereas the size of the prefrontal cortex is believed to have increased by six-fold within the same period.

According to research, the prefrontal cortex is said to be the last brain part to mature, i.e. its development isn’t complete until around 25 years of age. It’s the reason behind many sensible and intelligent teens engage in high risk and excessive behavior, even though they know the possible consequences.

How do you strengthen your willpower?

In conclusion, these are some of the top ways on how to strengthen your willpower. Just like muscles in the body, willpower can be strengthened using the right practice.